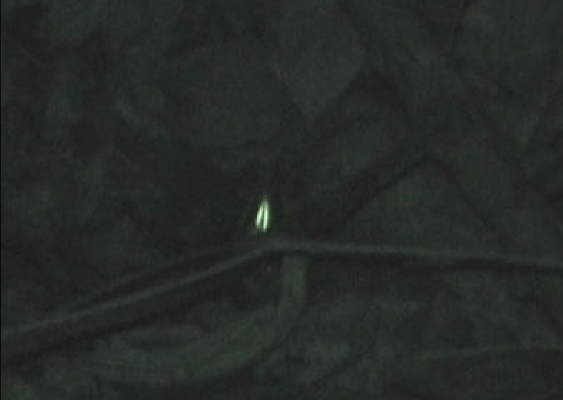 This video recording has recorded what I believe to be a mysterious light that is invisible to the naked eyes. This mysterious candle light look-alike was captured while I was video recording the surroundings of the Old Chinese Cemetery using combined internal and external infra red lights.

However, this mysterious light was captured at about 10 meters away and was only visible at this distance, because when I came nearer, the light disappeared. Further analysis on the video recording shows that the mysterious light had changed in appearance in three stages which are;

From the analysis, I believe that this mysterious light most probably is generated by the spirit energy, unlike the night environment that might glow as a result of natural phenomenon such as certain mushrooms and decaying wood which glow in the night in tropical jungles.

Furthermore, the glow that comes from a certain mushrooms and decaying wood only become more prominent in the darkness and would be disappeared when a touch such as infra red light shine on it because the glow is not powerful enough to be notice under the light of infra red.

Kind and respectful responds are much appreciated and you may post your respond below:

Except where otherwise noted, content on this site is licensed under a Creative Commons Attribution-Nonecommersial-NoDerivs license: http://creativecommons.org/licenses/by-nc-nd/3.0/.